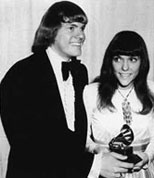 The Carpenters Exhibit features photos, artifacts and memorabilia from Richard and Karen's life and career, from childhood through mega-stardom. It is open during all Carpenter Center events, and by appointment, subject to the availability of the Carpenter Center. For further information, or to schedule an appointment, call (562) 985-4274.

During the height of their popularity, Carpenters earned 11 gold albums and 10 gold singles in the United States alone. Since that time, Carpenters have continued to gain new fans, both in the U.S. and abroad, with international sales exceeding 100 million copies. Many of their albums are now multi-platinum. The Carpenter Center is proud to display the gold and platinum records of Carpenters.

A copy of a 1973 Hot 100 Billboard Chart lists "Top of the World" in the #1 spot. Rolling Stone featured Richard and Karen on the cover of its July 1974 issue. The exhibit also includes a rare copy of Karen's 1966 Magic Lamp single.

To give visitors a behind the scenes glimpse of Carpenters’ creative process, Richard lent the group's original instruments to the exhibit, along with lead sheets and original scores of some of their greatest hits. The Center now showcases Richard's Wurlitzer 140-B electronic piano, which he bought in 1967 from Jeff Hanna of the Nitty Gritty Dirt Band, as well as Karen's 1965 Ludwig Super Classic drum set.

Also on display is the lead sheet for "They Long to Be Close to You," which became their best selling single in the United States. In late 1969, A&M co-founder Herb Alpert asked Carpenters to cover this little-known Burt Bacharach/Hal David song. Richard found just the right approach to the song, and with their unforgettable vocals, "(They Long to Be) Close to You" raced to #1 in just six weeks. It was the first of many hits for Karen and Richard, and established Carpenters as a household name.

The two arrangements on display are "Goodbye To Love" and "Yesterday Once Morphotoe." These were the first two Richard Carpenter/John Bettis songs to be released as singles. Both became Top 10 hits in both the U.S. and the U.K.-as did two subsequent Carpenter/Bettis originals: "Top of the World" and "Only Yesterday."

Former students of CSULB’s music program, Carpenters remained close to their alma mater. They came back for several benefit concerts, each time to help the University Choir meet the cost of tours to such far-flung places as Hawaii and Europe. In 1994, the Richard and Karen Carpenter Performing Arts Center opened at the school that has always been close to Carpenters.

If you are interested in further information about Richard, Karen or their recording careers, we suggest contacting: