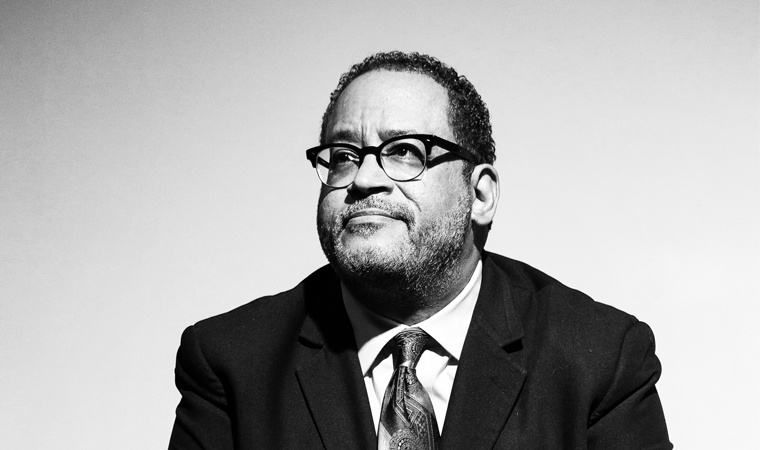 Join us for an inspiring keynote address on changing the narrative for success from esteemed scholar and best-selling author Dr. Michael Eric Dyson. Dr. Dyson will be speaking from the Black Alumni Scholarship Gala, a free online event sponsored in part by the Carpenter Center's Voices for Justice Series. Registration is free and open to the public. Please consider making a donation to the CSULB Black Alumni Scholarship Gala and participating in the evening’s silent auction and opportunity drawings. [View PDF event flyer.]

Dr. Michael Eric Dyson is one of the nation’s most renowned professors, gifted writers, inspiring preachers, knowledgeable lecturers and riveting media personalities. As a professor who earned a PhD in Religion from Princeton University, Dyson has taught at some of the nation’s most distinguished universities, including Brown, UNC Chapel Hill, Columbia, DePaul, the University of Pennsylvania, and Georgetown University.

As a writer of more than 20 books, New York Times bestsellers The Black Presidency: Barack Obama and the Politics of Race in America; and, Tears We Cannot Stop: A Sermon to White America, that was called by the New York Times, "one of the most frank and searing discussions on race…a deeply serious, urgent book, which should take its place in the tradition of Baldwin’s The Fire Next Time and King’s Why We Can’t Wait.” His latest book, “Long Time Coming: Reckoning with Race in America” published December 1, was heralded as Amazon’s Bestselling Book for 2020.

Dr. Dyson has lectured across the country, and around the world, in many of the best colleges and universities, and in public theaters and auditoriums, and for many corporations and unions. He has also served for the last 30 years as a media commentator and host, on every major radio and television show, from NPR’s Morning Edition, The Takeaway, and Fresh Air with Terry Gross, to television’s Meet the Press, Face the Nation, Today Show, Good Morning America, and Real Time with Bill Maher, and as a political analyst on MSNBC, CNN and Fox News. While feminist author Naomi Wolf calls Dyson “the ideal public intellectual of our times,” writer Nathan McCall captures it best when he says that Dyson “is a street fighter in suit and tie.”

The mission of the Black Alumni Committee is to lift Black scholars by engaging community leaders in providing resources, funds, and mentorships that help remove access and retention barriers for Black students seeking a quality education.

The CSULB Black Alumni Scholarship Fund has been created to support black scholars. Difficult life situations can often arise on a students journey to success. Whether it's a loss of a job or housing due to COVID-19, or other non-academic challenges, the vision of the BASG is to build a community that offers financial support, mentorships, and connections that increase the number of African American students on our campus that successfully complete their degree. Please join us in changing the narrative for success by donating and supporting CSULB students.

This online event is part of the CSULB Black Alumni Scholarship Gala.